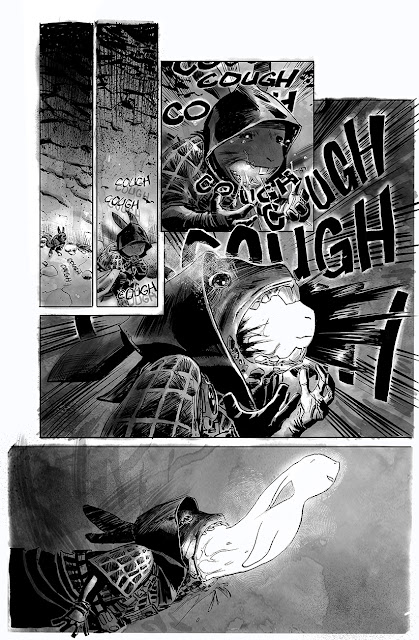 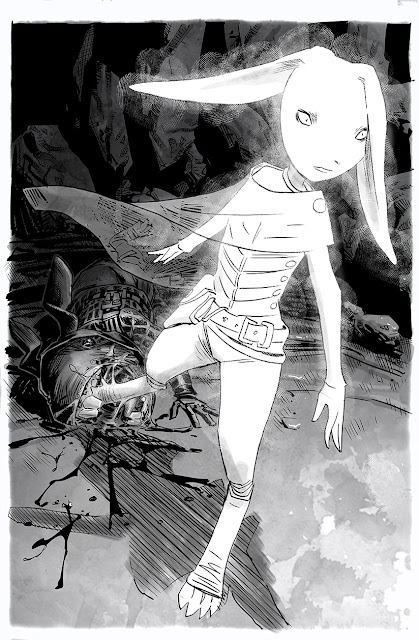 Up till now these Blast From The Past entries have been in chronological order. I told the story of my path to getting work in comics and into the early years of my career. In the last entry I finally reached the point when I started this blog, which is kind of like the end of the line. Everything after that is already talked about on this blog. So I've decided to start skipping around to talk about some random projects that I've never talked about or just have more to say about. So, here's a pretty good one.

When I was a member of Periscope Studio, now called Helioscope Studio, a project came to the studio that called for a short comic drawn in a manga stile. This was one of the cool things about being at Helioscope, the studio would sometimes get commercial projects that multiple people could work on. Most of the time I was too busy to participate in these sorts of projects, but this time it sort of worked out. This was towards the end of 2014.

The job was to create a comic that would be used in an extension mission for the PS4 game inFamous: Second Son. I think the idea was that a character in the game created a manga and as you played you'd get another page through some interactive online component. The manga needed to look like it was created with just ink, I believe because the character was imprisoned? I don't really know.

Artist, Ron Chan, brought the job in and Ben Bates and I joined him as the team to pull it off. In the beginning I ended up taking on the role of figuring out how we'd make this thing look. They sent us the story and we needed to produce some designs and samples to show them what we thought it should look like. The pages you see above are the sample pages I did to show how we would make it look.

I was working real late on those two pages. I had done some character designs that both Ron and I had agreed on. We were following exactly what was asked for. But Ben Bates wasn't into the designs, or what they were asking for. That night I asked Ben to show me what he was thinking and when he did I decided to redraw my pages. It was a tough call, because it did go against what they said they wanted, but I thought Ben's designs fit better what they said they were aiming for over all. We needed to aim at the target they told us to aim at and not take their advice on how to hit that target. Plus Ben's designs were just better than what I had done.

Here are some of Ben's designs. 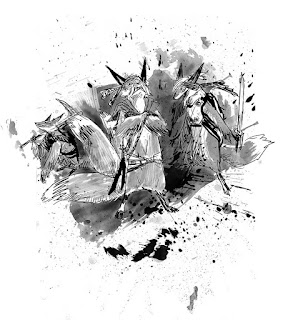 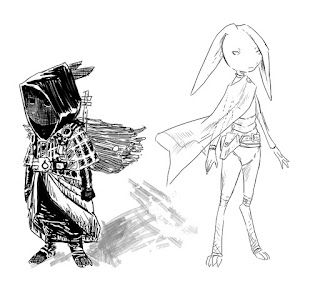 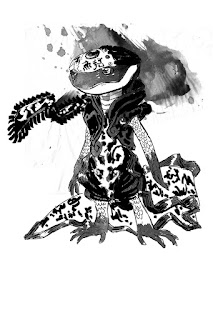 The decision to use Ben's designs payed off. They liked the direction, but more importantly, the comic would just look better for having his designs.

Here was the one design contribution I made that made it in. 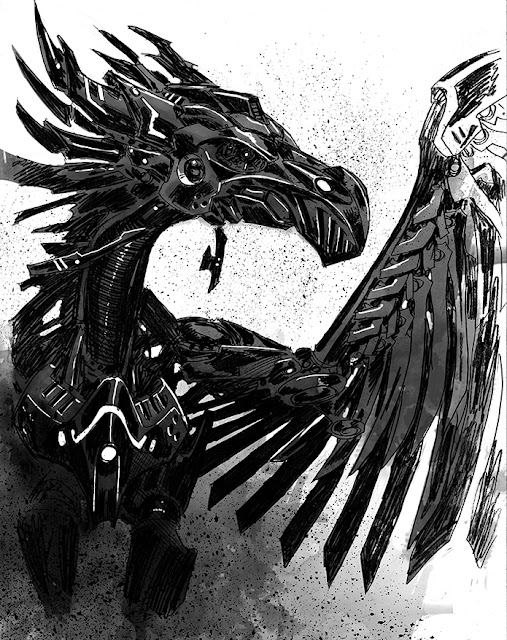 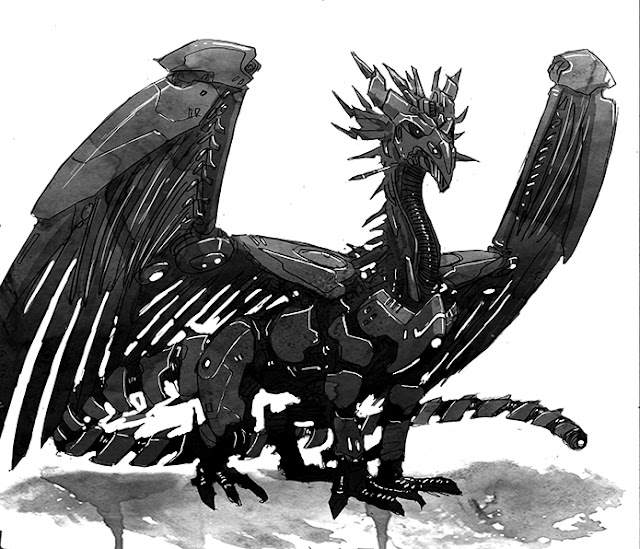 Once we were approved to get to work I started doing layouts. I was working against a clock because I had an upcoming family trip for the holidays. Ultimately I was only able to get 10 of the 21 layouts done. 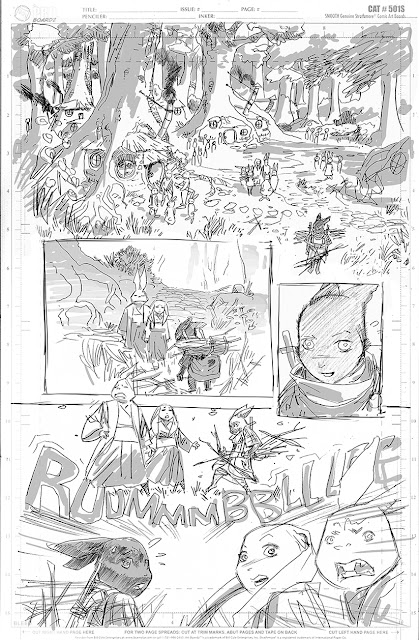 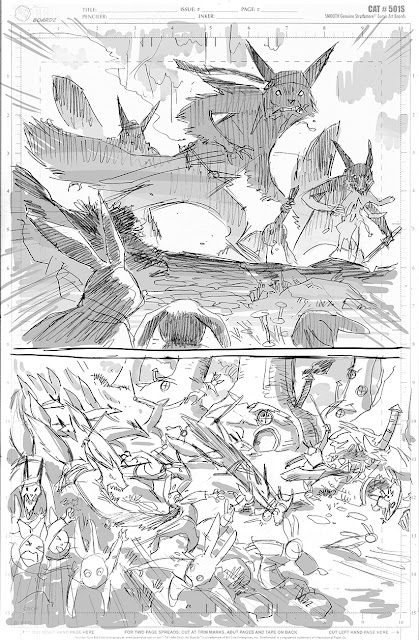 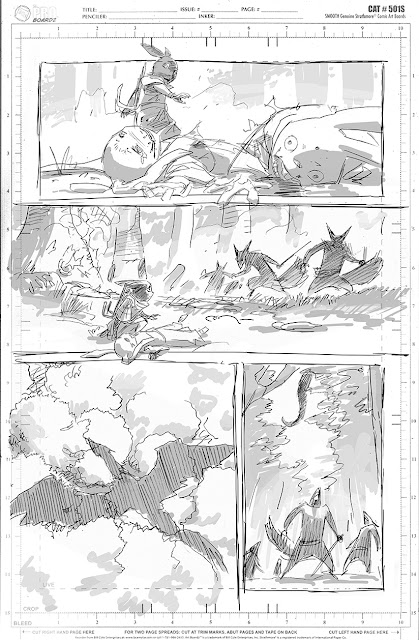 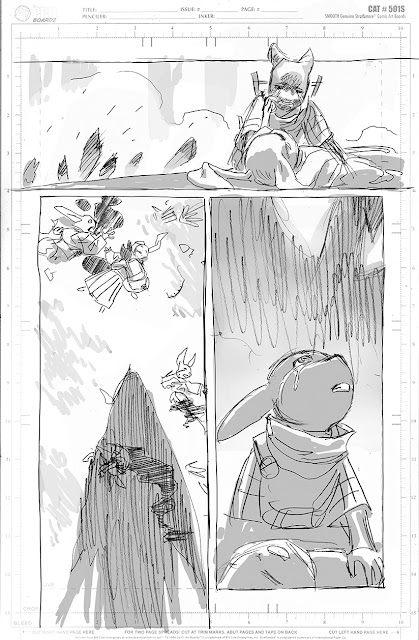 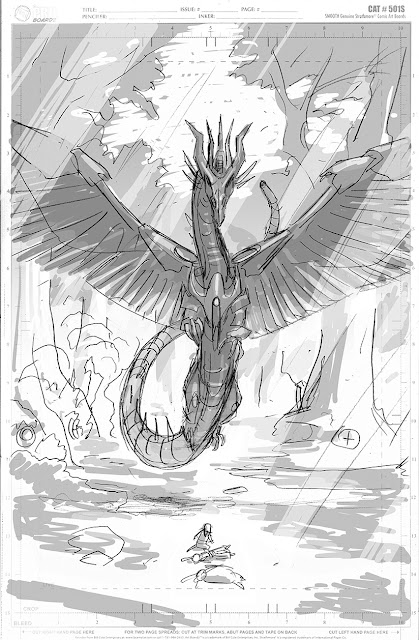 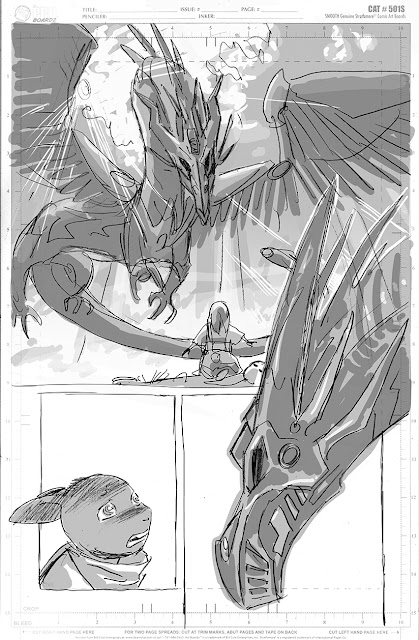 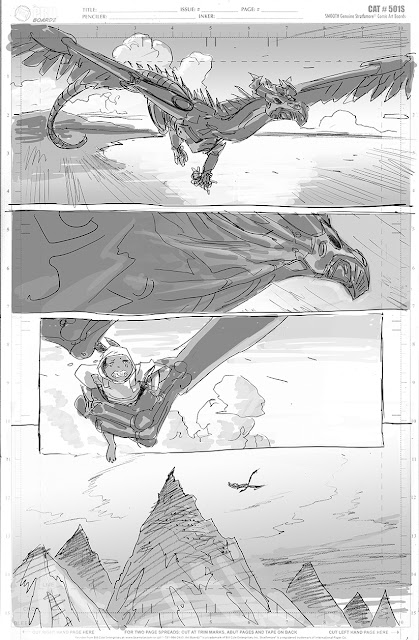 As it turned out, because the pages were meant to be drawn on origami, the layouts needed to be square. We found that out just as I left for my trip, so it was in Ben and Ron's hands to reformat my layouts and finish the comic. Ben took over on layouts and Ron reformatted my layouts and inked most of the final art with some help from the likes of Rich Ellis, Natalie Nourigat, and Wook Jin Clark.

For me, this was a pretty fun project. I enjoyed working with Ron Chan and Ben Bates and I think we did a good job. I wish i could have seen it through to the end

You can see all the final pages at this link: https://imgur.com/gallery/EL8unqr
Or you can see them all in this video!

Blogged and Blogged.
Posted by Dustin Weaver at 12:39 PM

Email ThisBlogThis!Share to TwitterShare to FacebookShare to Pinterest
Labels: blast-from-the-past